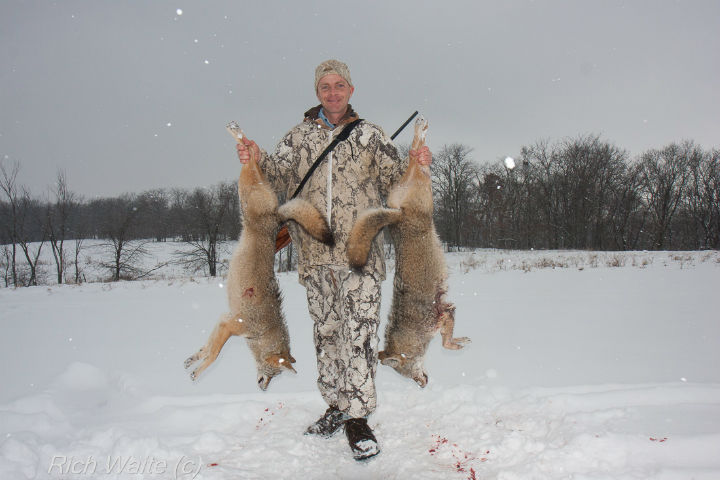 An old friend from eastern Iowa called me, “We really had a great hunt this morning”, he said excitedly. “We set up on a big open ridge and howled at first light,”

He continued on, “Within minutes a coyote howled back seconds and seconds later two coyotes sprinted right at us, full-bore”.  Geez, I said.  Incredible!

“It was definitely exciting, and we got really lucky, my friend continued on, when they both slammed on the breaks at about 80 yards. They stopped just long enough to get off a couple of shots and we got them both”!

Wow, what a hunt!

Of course, a story having such an outcome doesn’t always happen when calling Iowa coyotes. But it does happen, and fairly routinely.

In fact, some sort of action typically unfolds every other setup or so. As long as the hunter is careful and set up correctly, that is.  And, of course, so long as a hunter is in good coyote country and is calling at the right time of day (and year).  (I’m not saying this is always easy).

An absolute key is, to face into the wind with each setup.  A coyote’s nose always knows —  so fooling a coyote’s nose is the first step in calling one to you.

What sort of call?

I’ve had excellent results with the Hunter’s Specialties Johnny Stewart predator call (about $35 — it’s a steal). The range for the remote on this goes out to about 50- yards — which is long enough (just barely) and the call has 5 pre-programmed sounds. (They still make this call, I believe, but I think it has been upgraded since I’ve bought mine). This call may be inexpensive but I’ve called in several coyotes and foxes with mine (and even a couple of bobcats). I’ve had mine for several years and it just keeps working.  It’s great for “running and gunning” because it is super light-weight and fits easily right in your pocket. 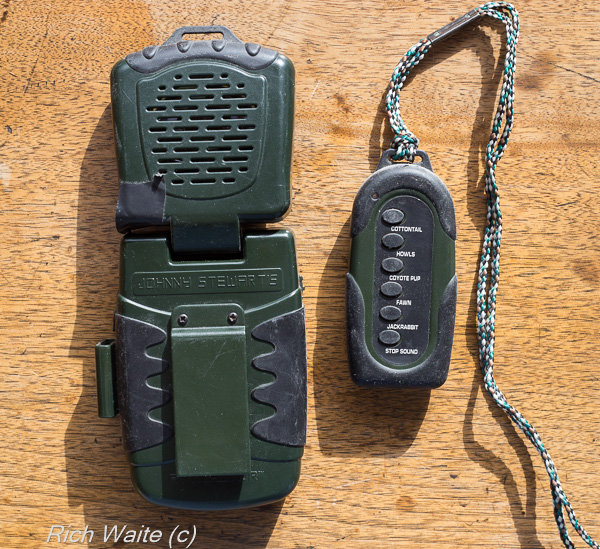 This little electronic call from Johnny Stewart is inexpensive — about $30 — but it has shown that sure can call in coyotes and other predators.

However, I also employ a more expensive, and louder, FoxPro Wildfire electronic caller (I don’t believe they make this exact model any longer.  I believe the FoxPro Inferno is a newer and more upgraded version — it comes with 75 sounds built-in and you can download up to 200 sounds total onto this unit from the FoxPro web site).

FoxPro, and other call manufacturers, often tout how many different sounds their callers can produce and be can be programmed for. But to be honest, you only need a few different sounds to call in an Iowa coyote.  But, there is no doubt that the FoxPro and other electronic calls on the market are truly fantastic for calling in predators!  A big advantage with these units over the little Johnny Stewart caller previously mentioned is that they are much louder which is great in the wind!  They can also be used with an auxiliary speaker as well to make them even louder.  Plus, their remotes usually operate at a longer range too. 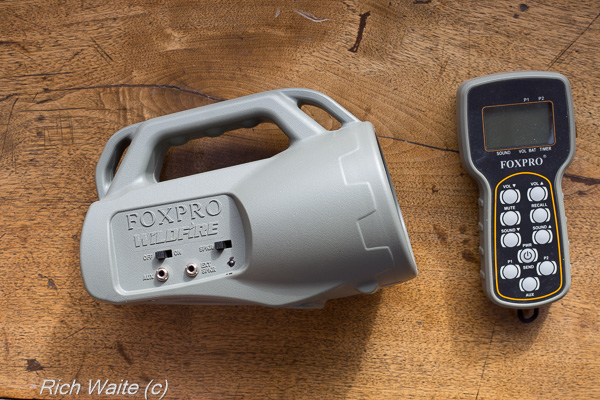 FoxPro makes some great and sophisticated calls. This is one of their older and more basic models but it works very well in all conditions and is plenty loud enough for most situations.

The various prey-in-distress sounds of the: cottontail, jackrabbit, squirrel, and fawn.  Plus, a few different howls are the calls that are generally used to call in an Iowa “song dog”.   And that’s it. You don’t need a call that is capable of producing 100’s of sounds to call in coyotes, that’s for sure.  (But they sure are nice!)

I’ve called in lots of coyotes with a traditional mouth-blown call.  The various calls that Primos and Dan Thompson put out are usually great.   I really like the Dan Thompson PC-2 for squealing just like a rabbit!

Mouth-blown calls like the howler — above — and the rabbit-in-distress — below — work well. Their major downside is that predators like to circle downwind and they may pick you off as the source of the sound before you can get a shot.

I like to set up 40-80 yards downwind of the actual call (depending upon the terrain – the thicker the cover is, the closer you’ll need to set-up so that you can see what is happening).

Being able to set up some distance away from that actual call itself is the real advantage of the electronic caller vs. use a traditional hand-held caller. Nearly every predator that comes into a call is going to circle downwind of it – they don’t always do this but they most often do.

So if you are camped out right on top of your caller you may be busted by the nose of the coyote before you can get a shot.

I typically set up my speaker in an open area – so any coyote approaching can see it from quite a ways off. They don’t know what it is from a distance and I think they assume it’s the dying rabbit that they think they hear screaming. I’ve never seen where a coyote spooks from it even at close range and it seems to draw them in out of curiosity – they may think it’s a funny looking rabbit sitting there but it’s about the same size and it seems to me like they believe that is what it is.  I’ve had bobcats come right up and sit next to the call!

When is a good time to hunt Iowa coyotes?

Well, as far as time of year goes, now is a great time.

Coyotes breed in the wintertime, in Iowa, and become responsive to various sorts of howl calls.

Sometimes a coyote will howl back when you howl with your call and sometimes they just sort of come sneaking in. You just never now and so you have to always be ready the moment you start calling!

You can try howling to see if that works first. Sometimes it does. Sometimes it doesn’t. Lots of guys swear by it. It does work but I think having luck with howling is very dependent upon the particular mood they are in during the immediate breeding season.

I’ve found that I’ve had my best luck, however, with a cottontail rabbit in distress call. In my area, rabbits are numerous and the coyotes seem to really key on them as food items of choice. It seems like the success of the rabbit-in-distress call has a direct relationship with the snow and the cold – the worse the weather the better that sort of call works. So don’t let the snow and the cold stop you. That is the best time to go call in a coyote!

But you don’t want to over-call!

In each spot, I’ll call one sequence of calls every 10 minutes or so until I elect to move onto a new location (often calling progressively loader each time).

Best times to hunt are early and late and even at night (full-moon conditions). It’s totally possible to have some great hunts all day long, especially during the winter coyote breeding season and/or when food is sparse.

I’ve found that giving each spot 45-minutes or so is about right. Sometimes, a nearby coyote will come right in when it hears the call and sometimes it seems to take them a while.

When you setup each time, it’s important to get quite a ways away from your previous spot. I try to go at least as far as I think the noise coming out of my call speaker is going!  How far is that? Your guess is as good as mine. Who really knows. Coyotes can hear so much better than we can, so that’s always just a guess.

A key, though, seems to be covering lots of ground with your calling and not over-calling any one area. Iowa coyotes often range huge areas – especially when food is sparse (up to several thousand acres). And, coyotes are cagey smart. If you call one in, or group of them, and mess up, you can plan on calling them in again to be that much harder.

Iowa coyotes — like coyotes everywhere –get wise and get wise quick!  The best bet with calling is to move around widely and cover lots of new areas to avoid educating the coyotes in any one spot.

With each set-up, make sure the wind is as much in your face as possible. And, you will want head-to-toe camo. Being statue-still is paramount when calling as a coyote – or a bobcat or fox – may be silently sneaking in and eying your location.

What gun to use? 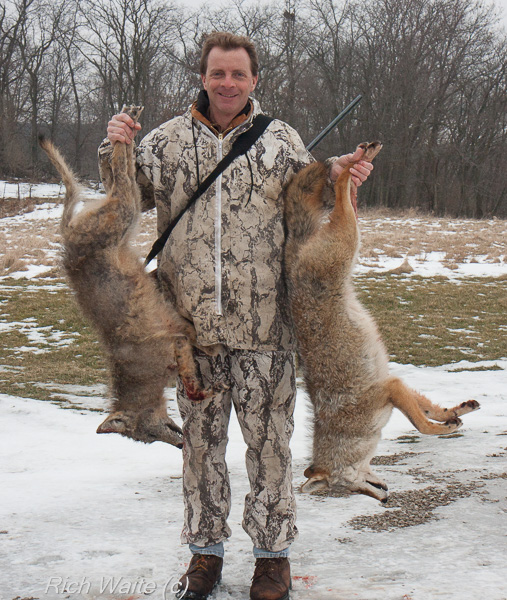 A couple of “song dogs” I shot with my trusty .223 a while back. Notice how mangy the one on the left looks!

Some hunters may feel like they are doing their deer herd the grandest of favors when they shoot a coyote.

And while there is no doubt that coyotes do eat fawns and sometimes packs of coyotes may even overcome healthy deer – especially in deep snow conditions where deer may be less mobile – shooting a coyote or two doesn’t really do that much to help the deer herd.  In fact, it probably doesn’t help herd numbers at all long-term.

I recall a college professor in a wildlife management class speaking of coyote population biology and how coyotes populations tend to be cyclical in response to the cyclical nature of rabbit populations.

Coyotes have an interesting trait whereby they increase the size of their litters from an average of 5 or 6 to as many as a 12-16 pups, whenever the human population puts any kind of pressure on their population. Also, when coyote howls are not answered by other coyotes during the breeding season, female coyotes somehow are innately triggered to produce larger litters that year. It is clear that coyotes have an adaptive trait that enables them to survive – maybe even better – when humans put pressure on them. We can reduce coyote numbers by 70% and by the next summer the population will be right back to the original number!  (1)

But just because we can’t ultimately dictate the long-term population level of coyotes and deer herd numbers, by hunting coyotes – doesn’t mean that we, as hunters, can’t make some short-term benefits in regard to our local deer herd by shooting a coyote or two.  By taking a few coyotes we are most likely lowering the stress level of the local deer herd that year by way of reducing the number of stressful deer/coyote interactions. This is a good thing.

What do you do with a coyote after you shoot it?

Tan the hide and hang it on your den wall.

Or, get it mounted (they make gorgeous trophies – WOW! )

Another option is to take the whole coyote into the nearest fur dealer: they might give you a few dollars for it whole or they might not. You have a better chance of selling it if you skin it and take it in: expect to get anywhere from $10-$35.

1). How the Most Hated animal in America Outwitted us All (By Simon Worrall; Book talk, National Geographic)
PUBLISHED AUGUST 7, 2016

Iowa Wildlife Habitat Services is a participant in the Amazon Services LLC Associates Program, an affiliate advertising program designed to provide a means for us to earn fees by linking to Amazon.com and affiliated sites. We fully believe in and have used all the products that we provide links to. However, we care about you! So, please do not click on these links and do not purchase any items if you feel these products will not help you. We receive no sponsorship dollars and buy these items ourselves and only provide links to items that we think will help you!